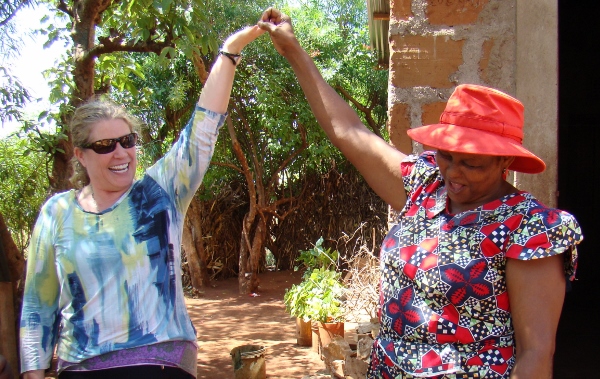 Originally published in the 2016 Project Brochure – see her update below

When she joined the project in 2012, she lived in a one room home with little to no income. She lacked enthusiasm for her new chicken business. In the coming year, her business reflected this as it was not growing at the same rate as other women. Her issues were related to her life that was. When she was married, she had a better life.

We continued to guide her  forward pointing to what was possible as an entrepreneur. With support and keeping our commitment to help, her new life started to emerge. Her group became stronger, her interest and enthusiasm grew, too. She began to see what was possible with her effort.

Today, she is smiling! Rosemary has made the turn in the right direction. She has a thriving chicken business and a herd of goats.  She built a better chicken hut plus added on to her single room to create a real home.

Rosemary is pleased to inform us that her chicken business is making a profit despite a difficult year for feeding (it was unseasonably dry). This year her plan is to expand her chicken cage to make room for 60 chickens from her current flock of 25.

Rosemary has made some large payments on her original loan which pushed her past the ‘magical’ 50% repayment line. At 50% repayment, the women are able to access the group line of credit that her Group B manages. So she did just that, borrowing 100,000 Tsh ($60 Cdn) for a home renovation to make a new kitchen, a new goat enclosure and the chicken cage.